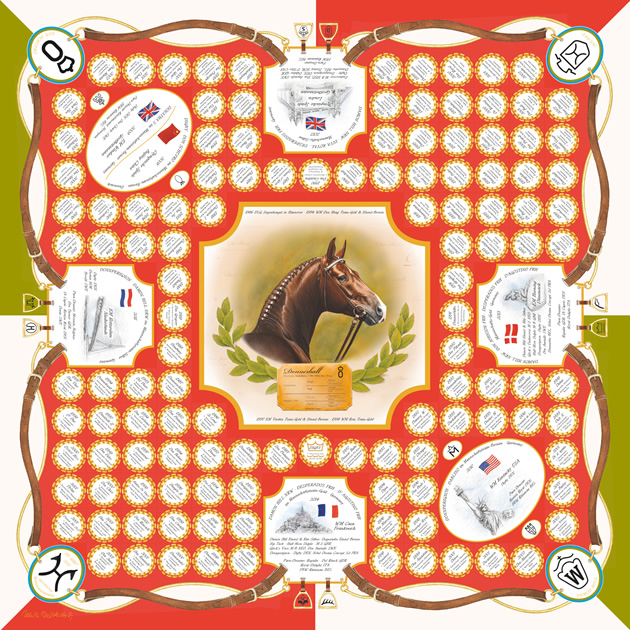 Donnerhall - the Scarf dedicated to the Stallion.

A grand success story on pure silk.
Celebrate an extraordinary stallion with an extraordinary scarf. Donnerhall. This Oldenburg stallion is still present all over the world through his successful offspring. His greatest achievements have been depicted on pure silk by Ulrike Walderdorff in close cooperation with the artist, Britta Arends-Weinrich.

There’s a lot to be discovered on this elegant silk scarf. The scarf, which is 90 x 90 cm, depicts 121 licensed stallions registered in Stallion Book I in Germany with pedigree and breeders. 6 Championships: EC, WC, Olympic Games and the achievements of Donnerhall’s offspring from 2008 - 2013, including para riders.

The design of the scarf. In the centre you see the stallion Donnerhall under his trainer, Herbert Rehbein. Surrounding the stallion you find his greatest achievements.

The ribbons are next. In the direction of the clock, they depict his 121 licensed sons in Germany that are registered in Stallion Book I. The list begins with his first son, “Don Primero”, born in 1985. You also see a larger ribbon in the middle beneath the picture of Donnerhall. It emphasises De Niro, Donnerhall’s famous son who was crowned the world’s best dressage-maker in 2012.

Six show venues from 2008 - 2013 show the achievements of Donnerhall’s offspring at championships: EC, WC and Olympic Games. Parallel are the para rider medal winners, listed according to the five different degrees pursuant to regulations. These medal winners in particular prove that Donnerhall passes on his excellent character.

The Scarf of the Champions

The success story continues.
Since her first scarf, “Donnerhall – The Scarf Dedicated to the Stallion”, was received so positively, Countess Walderdorff decided to create a second scarf to honour not only the breeders but also the Verbands whose brands have contributed to the reputation of the famous “D” line.  “Donnerhall – The Scarf of the Champions” is the name of the second scarf in the series that Ulrike Walderdorff, once again in cooperation with the artist Britta Arends-Weinrich, has created. This silk scarf was presented for the first time at the 81st Fall Elite Auction in Vechta on October 3/4, 2014.

The brands of the legendary “D” line. The first things you notice with the second scarf are the fresh colours, the new design and the attractive placement of the different brands of the “D” line. In addition, the results of the recent WC 2014 have been included. And what else is new? In the middle of the scarf you see a portrait of the stallion, semi-encircled by a laurel wreath, the sign of victory. Beneath this you find his pedigree back to the second generation. This motif was taken from the Donnerhall Room in the Irish Manor at Artramon.

To make room for the World Championships 2014, we combined the championships in 2008 and 2009. The venues from 2011-2014 with results, which have been placed between the portrait and the outer edge, are framed in the same manner as the central portrait. Two stirrups have been hung on each frame with the different brands of the licensed stallions as well as the championship horses. Further brands have been placed throughout the scarf. In each corner you find the brands of the four largest German Verbands, each with one of their most famous offspring: Oldenburg (Don Schufro), Hanover (De Niro), Westphalia (Damon Hill), Holstein (Dolany).

The ribbons follow. They have been grouped in the same arrangement found on the first scarf. This time, however, there is an extra ribbon beneath the portrait of Donnerhall in honour of Digby, who is branded with the brand of the Danish Crown. The German-Danish dressage rider, Princess Nathalie zu Sayn-Wittgenstein, successfully competed in seven championships with Digby, a horse she bred herself, and took team bronze at the 2008 Olympic Games together with Andreas Helgstrand on Don Schufro (Oldenburg). In 2014 at the WC in Caen she surprised the spectators around the dressage ring with an impressive ride. She rode her 17-year old “King Digby”, still young and full of energy. The princess captured all hearts when she rode into the dressage ring in France, carrying her little “secret” under her heart.